In view of the Facility Management week, on 29th of June the Chamber of Commerce in Belgrade hosted a Conference where the idea for establishment of a Serbian Facility Management Association has been announced. Goran Milanov as a Vice Chairman of EuroFM and Chairman of BGFMA gave the first speech and encouraged the idea for formation of a Serbian facility management organisation. 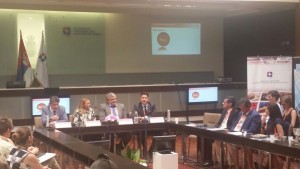